How to improve your chances of vehicle recovery after a theft

According to a study carried out by Auto Trader, only 43.4% of vehicles stolen in the UK between 2009 and 2018 were recovered by police.

These figures are shocking and a definite cause for concern for fleet managers. However, although theft can’t be prevented entirely, there are methods you can adopt to improve your chances of recovering a stolen vehicle.

Before we launch into discussing these methods, here are the basic steps you should take if one of your vehicles does get stolen:

Report it to the police

As soon as you’re aware one of your vehicles has been stolen, dial 101 and ask to be put through to your local police station. You’ll need to provide them with the vehicle’s make and model, colour and registration number.

The sooner you report the theft to the police, the greater the chance of recovering the vehicle will be; if too much time passes between your vehicle being taken and the police being informed, the chance that the vehicle has been vandalised, abandoned, burnt out or stripped for parts will increase.

Report it to your insurance company

It’s also a good idea to get in touch with your insurance company as soon as possible. This will ensure that, in the unfortunate event that the vehicle has been destroyed or is not recovered, claims proceedings will begin swiftly.

As well as notifying your insurance company, you should also let the DVLA know. The owner of a stolen business vehicle can apply for a tax refund if the vehicle is rendered unusable or not recovered.

The above tips are essential in improving your chances of recovering a stolen vehicle, but the most effective way to reduce vehicle loss from theft is by using a high quality telematics solution.

Tracking devices are helpful in locating stolen vehicles, but are often easily detected and removed by thieves. However, covert tracking is invaluable for fleet managers looking for a way to protect their assets.

Covert tracking devices are difficult to trace and use a variety of techniques to avoid criminal detection. Some even have the intelligence to alert vehicle owners when they suspect they’re being tampered with.

However, knowing a vehicle has been stolen is one thing, but you also need the resource to recover it. Part of the problem when it comes to the lack of vehicles being recovered is that the police are too under-resourced to react quickly to every theft. But, with a telematics solution in place, you can rest assured that a team of specialists will be able to track your vehicle and aim to recover it immediately.

See an example of how telematics helped to recover a vehicle quickly:

Combined with dashcam devices and intelligent software, connected telematics can provide you with data that monitors driver behaviour and can deliver alerts in the event of the following:

This data can help to indicate a theft and can be presented in court as evidence in the event of a collision.

Protect your fleet vehicles with telematics

Get our guide to the top five considerations when choosing a telematics supplier. 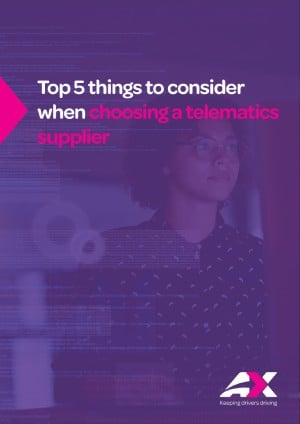